Sandbox Without A World Map

Over at B/X Blackrazor, in a post about silly hats*, JB wrote:

Commercializing Greyhawk may have been the biggest creative mis-steps Gygax made, assuming the world of Oerth grew OUT OF his original D&D campaign (similar to what Maliszewski has done with the world surrounding Dwimmermount). By codifying it and selling it he said: look this is what you do! Create a whole world with factions and nations and religions THEN try to figure out how “your heroes” fit in! […] So much easier to create the world a piece at a time, as needed, as the weirdness allows

I’ve been thinking about that problem lately: how to have a sandbox game while also letting the world grow organically. The way I imagine a sandbox game, the players point to a hex on a large-scale map, and that’s where they go. The obvious way to combine that sandbox style with an only-design-what-you’re-going-to-use-next-session game is to have a map with lots of empty space and vague descriptions. But that still entails having a predefined geography. I’d rather my players start the game uncertain of the scope of the world and their place in it. I came up with this type of compass chart as a solution: 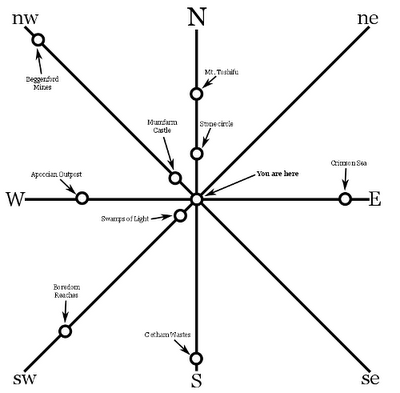 Players start the campaign knowing the relative distance and direction of some interesting destinations, but they’ll have to explore and make their own maps. Such a framework allows the world to grow organically. Another option would be to give the players a world map which you stipulate is inaccurate in many particulars, because of the difficulties in a world where most people rarely travel between the “points of light” in a vast wilderness.

I post about classic Dungeons & Dragons; and sometimes other roleplaying games, like Call of Cthulhu; or occasionally pictures of old Warhammer miniatures or my crappy doodles.